00Crisis coronavirus has strongly hit the socioeconomic fabric of the planet. In these difficult and demanding circumstances, restaurants have been one of the guilds that have fared worse. The motive is, to a large degree, than to prevent person-to-person transmission of the new and contagious coronavirus, it is necessary to impose restrictive measures in those public spaces where socialization is more frequent, and the dining rooms of our restaurants seem to fit within this description.

However, although restaurants have seen their limited capacity and their hours of operation shortened, not all businesses in the sector have received the same blow. comparatively, there are establishments that will emerge strengthened from this pandemic. Among them are the restaurants that had embraced the options of delivery: the distribution of food delivery, collection outside the store and drive-thru are the great drivers of the business in the midst of the coronavirus crisis.

While this pandemic lasts, fulfill orders online destined for distribution or take away will become the norm, but only some venues will be ahead of the others, and they will be the ones who enjoy more buoyant situations in the near future.

Of all the market niches in which restaurants operate, the one with the pizzerias is, undoubtedly, the one that will best cope with the health crisis caused by SARS-CoV-2, as seen in the following graph: 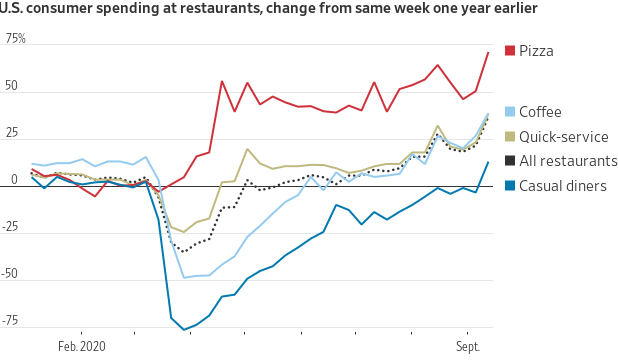 There are several reasons why this is so.

On the one hand, pizza chains usually have a large volume of digital business, which is sometimes above the 90% of the total. This is unheard of in other niches, where the mean is currently around 35%.

On the other hand, Pizza delivery at home has been going on for so long that it is practically a benchmark in the restaurant sector. Many major pizza chains have their own fleets of delivery men and are much more competitive on the market. delivery that businesses that have entered this market segment in the last five years thanks to collaboration with external specialized companies such as Uber Eats, Just Eat, Deliveroo O by Dash, to mention just a few of the plethora of services vying to dominate this business.

To make matters worse, The coronavirus crisis has made consumers more receptive than ever to the idea of ​​ordering food for delivery. And the orders that these people have made have not been distributed evenly among all the restaurants that offer this service. Unlike, prominent bias is detected when looking at data, since those companies with the longest tradition in the mobility sector have been the most benefited.

As we anticipated, early market entry has served as a visibility enhancer. A) Yes, who wanted to receive food at home during the hardest periods of confinement thought first of a pizzeria than a sushi bar. The result? The economic balance leans sharply alongside brands such as Domino’s Pizza, Fisshःut and the like; detriment, Of course, of the rest of establishments.

In fact, despite the fact that in large cities the rate of infections soared and strong measures had to be decreed to take control of the situation causing certain damage, pizzerias and some other niche specialty restaurants have thrived in less populated areas. Coffee shops, Casual dining restaurants and fast food franchises have benefited outside of metropolitan areas, with a notable rise in orders.

There has been a customer transfer. The establishments that had the infrastructure to offer the food delivery service at home have attracted diners who, to exist complete normality, they would have visited more traditional restaurants.

During the last months of winter and first of spring, when the West was still getting used to the crisis it was going to face in 2020 and years ahead, renowned restaurant brands such as Domino’s, Culvers O Jet Pizza grew at a rate between the 5 Y 10 percent. With the hardest moments of the first wave already behind, these same brands would rise at high speed.

In general, while a large majority of restaurants have fallen into an unsustainable situation that could lead to their closure in the short term, pizzerias have enjoyed a remarkably positive period. Making an annual comparison, its business volume has increased by 64% in EE. THE., a growth rate that can only be approximated by casual dining restaurants, whose business increase is placed in a shy (compared to pizzerias) 32 percent.

Along the first wave, There have been many articles that have allowed restaurant chains with delivery options of food delivery have grown. For example, mid april, Americans needed chicken wings to alleviate the effects of confinement, and this led to the demand for this product increasing by 120%. However, This increase was temporary and soon after gave way to other needs.

The shakes were also very successful in the delivery, and sandwiches had their little golden age. In general, fashions followed one another at high speed promoted by temporary offers, efforts in marketing of the different brands of restoration and the satiety of consumers. And in the midst of this maelstrom of changing consumer habits, a single constant, Pizza.

In addition to being a highly valued item by consumers, It is easily accessible and consumers were at all times receptive to the idea of ​​receiving a delicious four cheese or a margarita pizza at their home. The fact that there are pizzerias scattered throughout the country only made the accessibility of the product even greater. Remember that Domino’s Pizza has more than 6000 establishments in EE. UU., but it is not the only franchise with a number of premises established in the thousands: Papa John’s features 3000 establishments, something not negligible.

Pizza, iconic fast food and market banner delivery, made the restaurants specializing in this article benefit during the first wave, and there are several lessons that restaurateurs from other segments can learn; the most important being that an early entry into the food delivery market can give the business great strength in the face of unforeseen events.

Article by the editorial team of DiegoCoquillat.com. It has professionals both in the field of hospitality, gastronomy and tourism, and new technologies and innovation.